The following are the statements and opinions of Alastair Caithness, Blockchain Policy Advisor for Libertarian Party, and CEO of Ziyen Energy.

The legacy of Dr. Martin Luther King Jr. will always be one in which he is remembered for his undeniable role in the civil rights movement. Another legacy he championed towards the end of his career prior to his assassination in 1968, is the belief that poverty, not just amongst people of color, should not be normalized and he fought tirelessly to find solutions.

Income inequality is usually blamed on cheap labor in China, unfair exchange rates, and job outsourcing. Corporations are often targeted for putting profits ahead of workers in an effort to increase profits. U.S. companies must compete with lower-priced Chinese and Indian companies who pay their workers much less. As a result, many companies have outsourced their high-tech and manufacturing jobs overseas. Since 2002, the United States has lost 20% of its factory jobs.

The idea of Universal Basic Income became a popular policy again in 2019 when Andrew Yang, who ran for president as a Democrat, announced he would implement a guaranteed income if he were to become president. Yang proposed for the United States to set a guaranteed payment of $1,000 per month, or $12,000 per year, to all U.S. citizens over the age of 18.

As Yang dropped out of the Democratic race, his idea ended with his withdrawal, yet because of COVID-19 it has now returned as a mainstream policy debate.

The question is how far will $1000 go? He never addressed the issue of the impact of inflation which would trigger because of the increase in demand for goods and services, and in the long run there will not be a major increase in standard of living for poverty-stricken families because of inflated prices.

Alastair Caithness, Head of the AmeriCoin project, stated “AmeriCoin is the only feasible way to save Main Street America. I credit Andrew Yang and the Yang Gang for their sentiment; however, we must provide more than just pure survival but a solution to kick start the US economy and give every American the opportunity to live the American Dream.

The current Federal stimulus plan will push too many Americans into poverty and relies heavily upon the Federal government for their survival. This plan is exploding the Federal deficit, which will turn the US into a debtor nation, potentially destroying our economy and world standing which could carry on well into the 21st century.”

There is an alternative option available.

AmeriCoin converts the Federal government’s substantial resources into a usable currency which will be distributed to all American citizens. This distribution will level the economic playing field for all Americans and will serve as a form of reparations and basic income for US citizens who have struggled to achieve economic liberty. AmeriCoin will exist as a digital asset and tokenized store of value, enabling the US economy to function without the controls of the Federal Reserve and the Federally chartered banking system.

Our white paper, Finance Infrastructure Through Blockchain-based Tokenization, in collaboration with researchers from the University of Florida and the World Bank provides the most credible solution to encourage the U.S. economy. Unlike Universal Basic Income, which is about minimum basic survival, this is a sophisticated model of Tokenized Asset Distributions on the Blockchain, and a monetary policy designed to kick start the US Economy. The development of AmeriCoin follows a similar model as ZiyenCoin and is fundamentally a tokenization of a verifiable pool of assets. Of course, the vision of AmeriCoin is to replicate these innovations on a far larger scale utilizing all the assets of the Federal government, including its substantial land, energy, gold, timber and mineral reserves.

Initially AmeriCoin should coexist with the US dollar (USD), and while it has long been the viewpoint of the Libertarian Party to abolish the Federal Reserve and its fiat currency in totality, that would be a plan that would undoubtedly raise intense skepticism. As a result, in order to get buy in from the American People, the USD should remain in place and benchmark the value of AmeriCoin to a single USD. The development of the blockchain now enables the Federal government to distribute the tokenized value of its significant real assets into the hands of Americans utilizing a digital wallet. It is possible to set up a digital wallet for every American and to make distributions of AmeriCoins by using Social Security numbers in a matter of days. 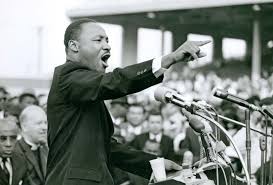 It is now over 50 years since Dr. Martin Luther King has passed away, and his fight for equality and ending poverty has remained unresolved. The Federal Government’s one-dimensional inner-city federal housing policy had unintended consequences, including displacing residents, demoralizing communities, and creating concentrations of poverty, unemployment, and crime. The severity of COVID-19 is a crisis within a crisis in inner-city areas where problems and statistics are magnified compared to the rest of the US.

The media focus of inner-city problems only truly exists for a few fleeting months every four years when Presidential candidates sense opportunity and offer promises and solutions to problems that have plagued generations, and after November little is accomplished leaving residents from those communities frustrated and helpless.

It is worthwhile to think how Martin Luther King Jr. would have made sense of a solution that involves tokenizing the National Reserves and federal energy assets, in order to remedy some of the problems that plague poverty-stricken people. Yet, this dream may become a reality with the advent of emerging technologies such as, the blockchain and tokenization that will make those dreams a reality.