Tokenization, though in its infancy, is one of the most promising applications of blockchain technology.

Tokenization creates a digital representation of an actual asset such as a currency, commodity, equity or other financial instrument, where each blockchain token represents a fractional ownership interest in that asset.

The tokens may be transferred on a blockchain shifting ownership of the underlying asset as the token moves from one person to the next – much like a dollar bill exchanging hands. Unlike cryptocurrencies, many tokens are not subject to risk of theft or loss via hacking or loss of encryption key because transfers are recorded by a registered transfer agent responsible for maintenance of the token ownership ledger. 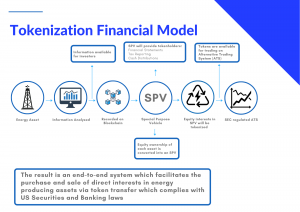 There has been an emerging trend in the blockchain industry to use blockchain technology to create tokens which represent direct interests in financial assets. These financial assets can include equity, debt, currencies, commodities, real estate and funds and derivatives of these assets.

The world may be shifting toward renewable energy, but the pace isn’t fast enough to offset the impacts of worldwide economic expansion and a growing population. Currently 84% of global primary energy comes from carbon-based energy sources and is worth over $8 trillion.

Because of the long-life of energy producing assets and the anticipated fluctuation of oil prices, costs of operation and quantity of oil produced, valuing assets can be difficult.

Additionally, as there is no ready market for interests, holders are often in the position of holding the interests for the life of the related oil well. While some investors may desire to hold an energy producing asset throughout its life, experience in all other asset classes indicates that asset holders prefer to have the opportunity to sell in a liquid market so that they may freely do so for an infinite variety of reasons. Similarly, potential investors who want to hold interests in energy production assets want the ability to allocate funds to the asset class, and select assets within the class, and will value such assets with a premium if there is sufficient liquidity to sell when desired.

The relative absence of a liquid two-way market for energy producing assets has the effect of depressing valuations and keeping these financial assets in the hands of investors who may prefer liquidity and out of the hands of investors who wish to benefit from the economic characteristics of investments in these assets. From an operational perspective, asset expenditure is locked into the life cycle of the project. Tokenization will provide a system to unlock billions of dollars creating a new level liquidity for the industry providing a mechanism to speed up the transition in energy.

Global spending on renewable energy infrastructure exceeded $2.5 trillion during the period from 2010 to 2019, with over 25 countries investing over $1 billion in 2018. This amount is expected to continue to grow during the coming decades, and industry groups are calling for US private sector investment in renewable energy and enabling grid technologies to reach $1 trillion by 2030.

The ZiyenCoin Tokenized Fund creates an investment mechanism to invest directly into wind and solar projects.

If you would like a copy of the investment package please email – investorrelations@ziyen.com